This Week’s NBT (Next Big Thing) :  “BAYLE”  by REGGAE MISTRESS

women harmonized into one. A style all their own aptly called the Mstres Stylee. 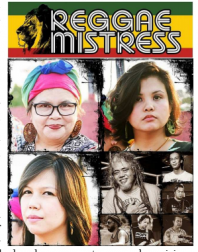 Rene “Chong” Tengasantos, and wife Irma
“Chang” two of the pioneers of reggae in the
Philippines thought of forming a “Pinoy”
sounding reggae band back in 2002. Chong
conceptualized the group with women
frontliners in mind, a fresh idea in a maledominated
band scene. He was inspired by
the I Three – Rita Marley, Judy Mowatt
and Marcia Griffiths, back-up vocals of the
legend Bob Marley.

The top unsurpassed drummer of Reggae
Eurasia (the first Pinoy reggae band) –
Chong and the blazing Reggae Momma of
the country – Chang is joined by daughter
Lady i and niece Ira on vocals.

They are backed-up by young yet seasoned musicians
–

A combination of the young and the veterans harmoniously woven together
dishing out one reggae feast after the next.

Reggae Mistress mixes up a deliciously concocted cocktail of genres from rock & roll,
blues, soul, jazz and a dash of dancehall and lover’s rock putting a reggae relish on
top making it a new sound, distinctively Mstres Stylee. The sistahs are really doin’
it!

Dubbed as the Souls Sisters of Reggae, they bagged the 2007 Reggae Artist of the
Year in the 3rd Philippine Hiphop Awards. They got nominations for “Bayle” as
Best World Music Recording in the 30th Awit Awards and “Kaibigan” as Best
World/Alternative in the 20th Awit Awards.

They were also in the running for Best New Artist in the 2006 NU107 Rock Awards.

Inner Circle and Big Mointain in the 1st International Reggae Festival in Manila
2016; Reggaefest by the Bay with Ziggy Marley 2007 and Black Eyed Peas 2004.

Reggae Mistress hopes to spread the good vibes of their music not only to Pinoys but
to the rest of the world. Staying true to the reggae spirit in One Heart, One Love,
One Soul. Roots Rockin’ Reggae that’s what they call it.

Our featured #NextBigThing (#NBT) this week ‘WAG KANG BUMITAW – KIM CHIU is an upbeat inspirational song about keeping your faith strong despite the circumstances and hardships. Reminding listeners to stay strong & keep still, never giving up because you’re probably much closer to achieving what you want than you think of. (Track Description by: […]

MCBN Media Group and the Filipino-Canadian Association of Vaughan are pleased to invite you to the biggest Filipino-Canadian summer event in the City of Vaughan, dubbed on its 3rd year as “Vaughan FIESTA EXTRAVAGANZA 2020”. The festival will be held at Dufferin Clark District Park on July 18 and 19, 2020, Saturday and Sunday. The […]

Enjoy the holiday season with loads of laughter from “BROmance The Movie”. Premiere night is at Cineplex Theatre, Yorkdale Mall, Thursday, Dec.12,2019. Red carpet event kicks off at 6:30pm. the cast led by PATRICK GUZMAN, written and directed by BEVERLY VERGEL and produced by MCBN Films Reserve your tickets NOW. Call at 905-781-6165 or purchase […]